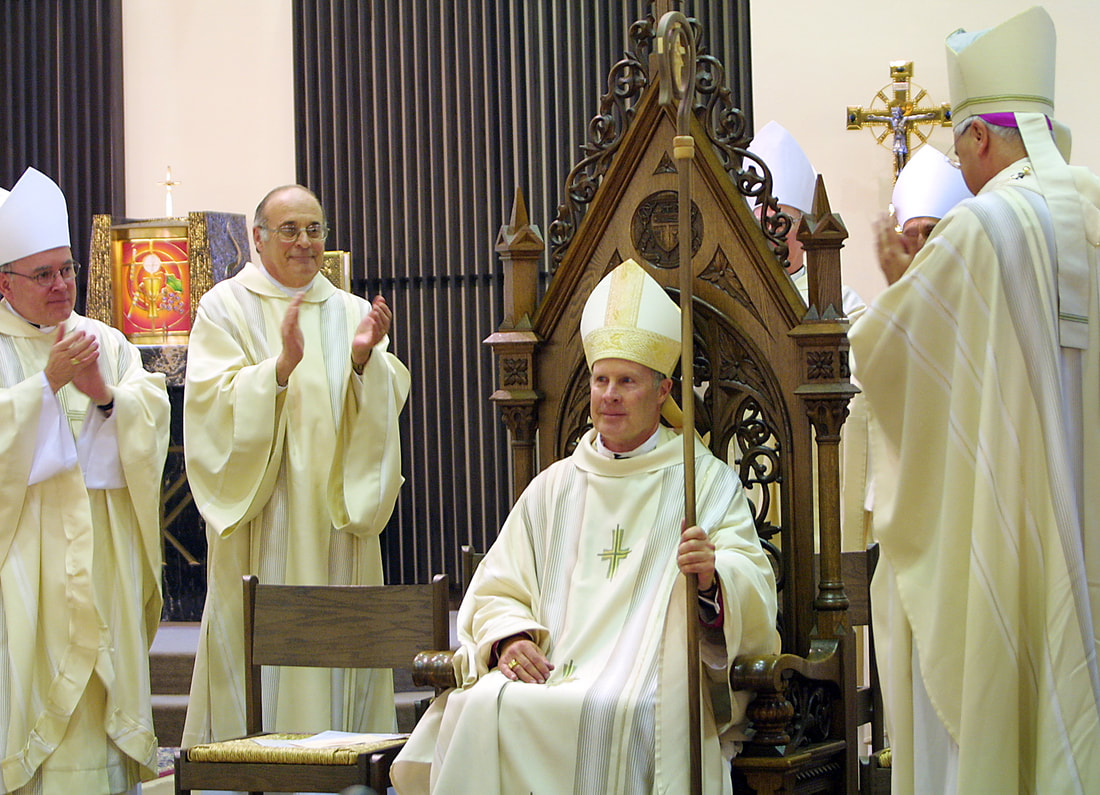 In this file photo from Jan. 20, 2006, the congregation and clergy applaud the newly-ordained Bishop Walker Nickless following his ordination to the episcopate.
By RENEE WEBB
Content and Design Coordinator

Bishop Walker Nickless turns 75 years old on May 28 and that means the time to submit to Pope Francis his resignation letter as Bishop of the Diocese of Sioux City is fast approaching.
According to Father David Esquiliano, judicial vicar of the diocesan tribunal, church law requires that bishops submit a letter of resignation to the Holy Father when they reach the age of 75.
“It doesn’t mean he will retire right at 75, just that he will submit his letter,” explained the canon lawyer. “In practice, the position of the bishop will not change until his resignation is accepted. The bishop is still the bishop. He does not change his title and everything remains in place. He maintains his authority and at Mass we will still pray for him.”
As his 75th birthday draws closer, Bishop Nickless said he feels that his time here as Bishop has passed quickly. “While there have been some challenges, these 16 years have been filled with so many blessings.  I feel fortunate serving with many great clergy, religious and laity to continue the mission of evangelization in this diocese.”  Bishop acknowledged that change brings with it new opportunities and possibilities.  “I’m looking forward to that both on a personal level and for the Diocese of Sioux City.”
Even though cardinals also submit their letter of resignation from their diocese at 75, Father Esquiliano said they typically continue to work until they are 80. While the time it takes the pope to accept resignations from bishops and archbishops can range in length, it happens sooner than for cardinals.
The website for the United States Conference of Catholic Bishops – usccb.org - states that it can take six to eight months or longer for a new bishop to be appointed by the Holy Father.
Generally, the resignation of a bishop is not accepted until the Holy Father’s appointee is ordained or installed a new bishop for the diocese. However, the canon lawyer said, “If there is a health issue, the pope may consider accepting the resignation earlier and then the process continues of looking for a new bishop and an administrator is appointed or elected.”
When the Diocese of Sioux City’s previous bishop was appointed to the Archdiocese of Galveston-Houston, this diocese became a vacant see and an administrator was elected to serve until a new bishop was in place. After Cardinal DiNardo was reassigned, the late Msgr. Roger Augustine was elected on March 30, 2004, as administrator of the diocese by a group of diocesan priests serving on the College of Consultors. Nineteen months later, on Oct. 31, 2005, then Msgr. Nickless was named bishop of Sioux City and his episcopal ordination was Jan. 20, 2006. This diocese was a vacant see for nearly 22 months.
Given that Bishop Nickless is in good health, he will remain in his position until a new bishop is ordained, or if already a bishop, is installed so this time around, the Diocese of Sioux City will not become a vacant see and no administrator will need to be appointed. Bishop said he is willing to serve as long as the Holy Father desires.
The time it takes for selecting and appointing a new bishop, noted Father Esquiliano, can vary because some dioceses have diverse and specific needs, especially larger dioceses. For the Diocese of Sioux City, they may try to select a leader who is fluent in Spanish and be a good fit for a rural diocese.
The ultimate decision in appointing a bishop will come directly from Pope Francis. Nevertheless, the process for selecting candidates starts at the diocesan level.
“All bishops are required with certain frequency to submit names of priests they think would make good bishops,” explained Father Esquiliano. This is done on a regular basis prior to provincial or statewide meetings of bishops. The bishops discuss the potential candidates and determine which to recommend to the apostolic nuncio, the papal representative in the United States.
After receiving the list of candidates forwarded by a province, the Vatican through the apostolic nuncio conducts their own investigation into the needs of the diocese and suitability of the candidates.
“The bishop will report on the priorities of the diocese and let them know what they might want to look for in a new bishop, such as should be able to speak Spanish,” he said. Input as to the needs of the diocese is sought by others as well.
The nuncio will submit a list of names to the Congregation of Bishops (which will be called the Dicastery of Bishops beginning June 2022).
“They will conduct research at that point. They will send out questionnaires about the candidates to different priests and people who may know them, especially from the chancery or a seminary director. All this is done under pontifical secrecy,” said Father Esquiliano. “They ask questions about the candidate’s theology, pastoral skills and even their health.”
After the research has been completed and they determine the final candidates are ideal for that particular diocese, the congregation will submit a list of three names to the pope and he selects the bishop.
“It is not unheard of that the candidate would be from the state or even diocese – although the state is more common,” said the canon lawyer. “The bishops in Des Moines and Davenport were both priests in the Archdiocese of Dubuque.”
It is highly possible the candidates would come from a neighboring diocese, neighboring state or anywhere from the Midwest. The Diocese of Sioux City’s fourth ordinary, Bishop Frank Greteman was a native of the diocese, and its first bishop, Bishop Phillip Garrigan, was from the Diocese of Springfield in Massachusetts.
Presently, there are 10 superannuated dioceses – dioceses where the bishop has surpassed 75 years of age: Boston, St. Cloud, Camden, Kalamazoo, Winona-Rochester, St. Augustine, Portland, Rochester, Phoenix and Wheeling-Charleston. Plus, three more bishops will reach retirement age this year after Bishop Nickless.
This is first in a series of articles outlining the retirement process of Bishop Nickless and the transition to a new bishop.